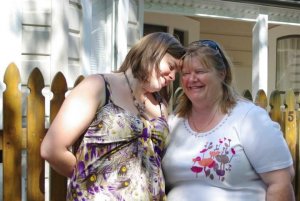 Leonie lives in Leeton, 59 years old, has one daughter – Bec, who lives in Launceston and one son in Brisbane. Leonie is a retired primary school teacher. Leonie’s GP in Leeton moved to Wollongong back in 2017. With all other local GP patient books full, it takes Leonie 3-4 weeks to get into a doctor, so she would typically go to hospital if she needed to see a doctor. It was here that a GP noticed a mark on her nose and cheek. Leonie was booked for a biopsy the next day. This revealed skin cancer and initially Leonie was referred to a skin specialist in Griffith.

The specialist there referred her to another specialist for surgery in Melbourne. She was informed that she would need to stay in Melbourne for one week as an outpatient. She would have to book a hotel within walking distance of the clinic, and she would always need a carer with her. Her surgery to remove the cancer along with a required plastic surgeon needed to be done in a private clinic which would cost Leonie some $4,000. With only $2,000 in savings, Leonie burst into tears.

Leonie travelled by train. Leonie took some 13 hours to travel to Melbourne. Her return trip arrived in wagga wagga at midnight, Leonie stayed overnight and travelled onto Leeton the next day, arriving around midday. Leonie spent two nights in Melbourne. Initially, Leonie was required to undergo 6 weeks of chemotherapy by mouth back at home in Leeton. It is here that she heard about Can Assist Leeton and reached out for help. Until now, no one had told Leonie about IPTAAS. The president of Can Assist Leeton – Mary, “told me about the scheme, printed off her forms and most importantly, listened.”

Requiring a “referral signature” for form one, (despite having already been at Griffith hospital multiple times regarding her condition) Leonie, having neither a scanner or a computer had to book an appointment and drive 120km return to secure that signature.

Leonie again travelled by train. Since she needed a carer with her for the duration of the treatment. Her daughter Bec travelled to Melbourne and spent the week with her. Leonie was left with 138 stiches across her face, a swollen shut eye and difficulties in eating. There were only 5 hotels in Carlton with the required proximity to the clinic. The cheapest alternative was a Travelodge at $1200 for the 6 nights, but it had no cooking facilities. She was unsure about what receipts to keep for IPTAAS – she retained all taxi, food, accommodation, surgery and pharmaceutical receipts. She found the forms an “absolute nightmare” and had it not been for the social worker at the clinic who took over the application process for her, she would have submitted receipts for every out of-pocket expense she incurred – including food and medication costs. Leonie directed her IPTAAS accommodation subsidy of 360$ to Can Assist Leeton who had funded her accommodation bill at the Travelodge of $1200. Having a long-standing agreement with Can Assist, the Travelodge provided free breakfast for Leonie and her daughter Bec. Bec paid for all other food costs and some taxis.

With the surgery a success, and after negotiating a reduced bill for her medical out of pockets, Leonie returned home to Leeton where she would undergo 3–6-month checkups to ensure that the cancer did not return. The cancer did however return, and her the local doctor advised her to return to Melbourne for a second surgery – which she simply could not afford.

The doctor suggested an alternative 4-week cycle of radiotherapy in Wagga Wagga where she stayed at the not-for-profit accommodation facility operated by Can Assist known as Lilier Lodge. Since the Leeton community transport offering attracts government funding, Leonie’s trip to and from Wagga at $42 return was not eligible for an IPTAAS rebate. Can Assist Leeton arranged and paid for this trip. By this stage of her treatment, Leonie had spent all her savings. Whilst Lilier offers much lower rates than the local commercial offerings (50$ lower per night) IPTAAS rebates still left her out of pocket hundreds of dollars. Once again, Can Assist Leeton funded the difference. Had it not been for Lilier and Can Assist “ I literally would not have been able to afford access to treatment. My only alternative would have been to borrow money and who would lend a pensioner that sort of money? The only possibility would have been a Centrelink Advance Payment of $1500 which would have entailed a forced payback of 100$ a fortnight on my pension. After bills, that $100 would have come out of my food money, it has all been so stressful. I will be forever grateful Can Assist and to Lilier Lodge for their help and compassion”

Leonie really wanted to talk about how special her time was at the Lodge and what a difference it made to the last part of her treatment experience. Leonie experienced a panic attack for the first time whilst receiving radiotherapy. It was a completely overwhelming experience for her, she couldn’t breathe and felt like she was dying. Leonie could not get back on that bus the next day to receive her treatment, and the manager of the Lodge – Margaret, took Leonie aside and asked her how she could help. Leonie says “I can’t remember what Margaret said, I just remember sitting there and hearing her calming voice which just washed over me . For the next 7 treatments, Margaret was there every day upon my return. She just sat with me – your OK, you’re here now, I’m with you …..It was just so nice to sit with someone who knew and understood. I cant reiterate enough, on your worst day what it means to receive this support, unforgettable” Leonie also talked of the kindness of the guests and how everyone supported each other.