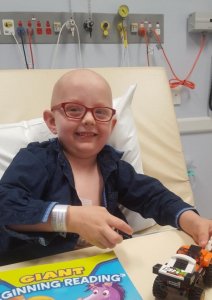 5yr old Tommy from Glen Innes woke up one morning very pale and with notable bruising; his Mum took him straight to the doctor. That same afternoon, he was flown to John Hunter Hospital in Newcastle and was diagnosed with Leukemia.

This was the beginning of a whirlwind for the Gill family – Mum, Dad and 2 younger siblings who were only 3yr and 6 months respectively at the time. Including various stays in hospital, Tommy, his two younger siblings and Mum accommodated at nearby Ronald MacDonald House for 12 months whilst treatment continued.

Initially, both parents stopped working, but needing to maintain a family income Lincoln would eventually return to work. From then on, he would make the 860 km, 11-hour return journey to Newcastle each weekend to be with his family.

After Tommy returned home, he developed a lung infection, and he was again flown back to Newcastle where he spent a further 1 month in hospital (half of which was in ICU).

After all the heartache, Tommy now has now been given a clean bill of health, and a 3rd sibling – baby Clare.

The Gills travelled well in excess of 50,000 km over the course of Tommy’s treatment: around 150 trips in total. “I couldn’t put a number on what we spent…. then there was the time off work and all the extra travel, we could not have got through it without the help of charities like Can Assist who provided us with multiple travel vouchers” Sam Gill, mother of Tommy.