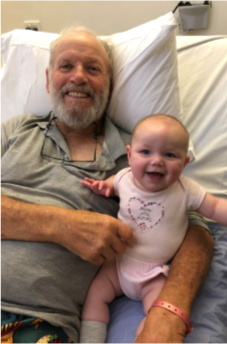 I found out about Can Assist in October 2017 through local advertising, when a meeting was called to restart the Wagga Wagga Branch after previously being closed down due to lack of interest and activity. I went along to the meeting as I had a family history with cancer and decided to join as a member as they were so focused on the local community.

I have quite the family history with cancer, so felt that this was where I could best give back, volunteering my time and effort.

In the mid 1800’s , my grandmother had a breast removed, but lived to 93 after the removal. Her daughter died from breast cancer in her 40’s as well as three of her granddaughters. Then her son (my father) died from bowel cancer at the age of 79, as did one of his brothers. My father had to travel from Wagga Wagga to Sydney at the time, to receive cancer treatment – this was approximately 26 years ago.

My mother also died from bowel cancer, 13 years ago at the age of 89. Luckily, the cancer care centre in Wagga Wagga was operational at the time and this saved my mother from travelling the long distances my father had to undertake. Just three years ago, my sister died of stomach cancer at the age of 67. So, my history with family cancer is quite extensive.

I myself had a malignant melanoma removed 12 years ago, and then my prostate removed in November of 2018. It was a setback when I found out that I needed surgery at the end of last year, but I kept thinking positively. After surgery, I needed six weeks of radiation treatment, which was administered five days a week. It was at this point that I needed to ask Can Assist for some financial help, to assist with the high cost of surgery and treatments to try and alleviate some of the many expenses.

I live on my own in Wagga Wagga and there is nowhere else to turn to for assistance. I’m still receiving a little help until I can get back on my feet. I am currently waiting for results of this latest surgery, but remain hopeful and have a loving family around me to offer emotional support.

The feeling of relief when Can Assist offered financial support was amazing. When I joined Can Assist as a member, I didn’t realise I would so quickly need assistance myself.

I saw the help they gave to our local people and simply wanted to be part of a great organisation in any way I could. I looked around and found I could help raise funds for the local Wagga Wagga branch by running raffles and organising BBQs. Now that I have been a recipient of the Can Assist program, I am even more thankful for the organisation and take pride in the fact that I am a part of the Wagga Wagga branch and its ongoing fundraising efforts.